In 1858, sitting Illinois Senator Stephen Douglas participated in a series of debates with his challenger, Abraham Lincoln, resulting in the now iconic Lincoln-Douglas Debates. Although the exact format of the debates was slightly different than the Lincoln‐Douglas of today (back then, the first speaker spoke for 60 minutes, the second speaker had a 90‐minute rebuttal, and then the first speaker had a 30‐minute rebuttal/time for closing arguments) the adversarial nature of the debates was similar.

Lincoln‐Douglas debate (more commonly referred to as LD) is a competitive speaking activity that involves two debaters arguing for and against a resolution that is selected by the NFL (National Forensics League) and voted on by coaches. Today, somewhat like the old debates, LD focuses on the conflicting values of social and philosophical issues, for example, by examining questions of morality, justice, democracy, etc. Typically, LD debates concern themselves with deciding whether or not certain actions, or states of affairs, are good or bad, right or wrong, moral or immoral.

This set of resources from the National Speech and Debate Association help explain the background and basics of Lincoln‐Douglas Debate so that you may prepare to competitively participate in the activity. This is a great starting point for anyone interested in learning about LD—be they teachers who want to add this event to their curriculum, or students looking to compete. 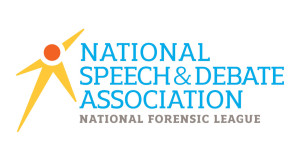 The National Speech & Debate Association connects, supports, and inspires individuals and schools devoted to giving middle school, high school, and collegiate students access to speech and debate. Together, we give youth a voice.